on 8 April 2020
by Marie Schulte-Bockum
#chip#testcenter

CHIP and its measuring partner NET CHECK have published the results of their annual test of Swiss mobile phone network providers just in time for the nationwide move to the home office.

As in the previous year, Swisscom and its big rival Sunrise are engaged in a neck-and-neck race in which Swisscom comes out on top once again. Last year, Sunrise still had the best network for making phone calls and was also ahead in the long-distance trains. Swisscom reclaimed top spot in both of these categories in this year's test. However, the third network operator in Switzerland should not remain unmentioned: Salt remains in third place, but achieves the excellent overall mark of 1.2. The provider thus improves most strongly in the CHIP test and receives the honorary title "Climber of the Year". 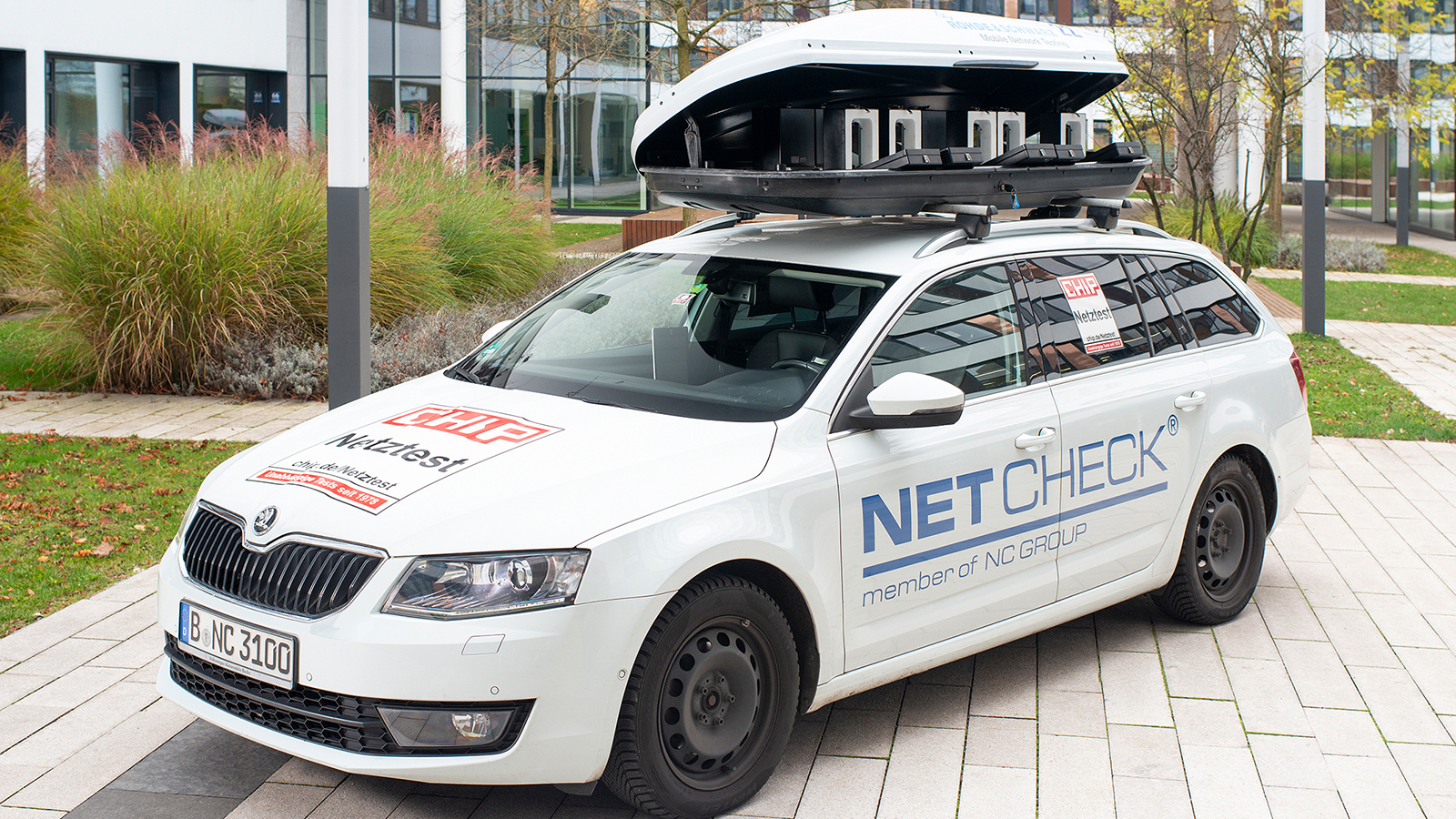 To collect the data, the specialists from NET CHECK travelled a total distance of almost 5,300 kilometres between Basel and Lugano, Lake Geneva and Lake Constance. The seven major cities of Zurich, Geneva, Basel, Bern, Lausanne, Winterthur and Lugano were examined. In addition, nine medium-sized and 20 smaller cities were surveyed.

Two cars with measuring equipment covered 2,025 kilometres in the cities and 2,105 kilometres on motorways and country roads. During the journey, nine of the 27 smartphones in use were mounted in a box on the car roof. This enabled the testers to use the smartphones' internal antennas and test the networks under realistic everyday conditions.

The testers also carried special monitoring backpacks on their shoulders to examine the quality of the networks in major cities - on foot and in public transport. Here, measurements were carried out over a total period of 90 hours.

The network quality onboard long-distance trains was determined along a stretch of almost 1,000 kilometers. Here, too, the NET CHECK testers used the Freerider III backpack measurement system from the Munich-based Rohde&Schwarz MNT Group. 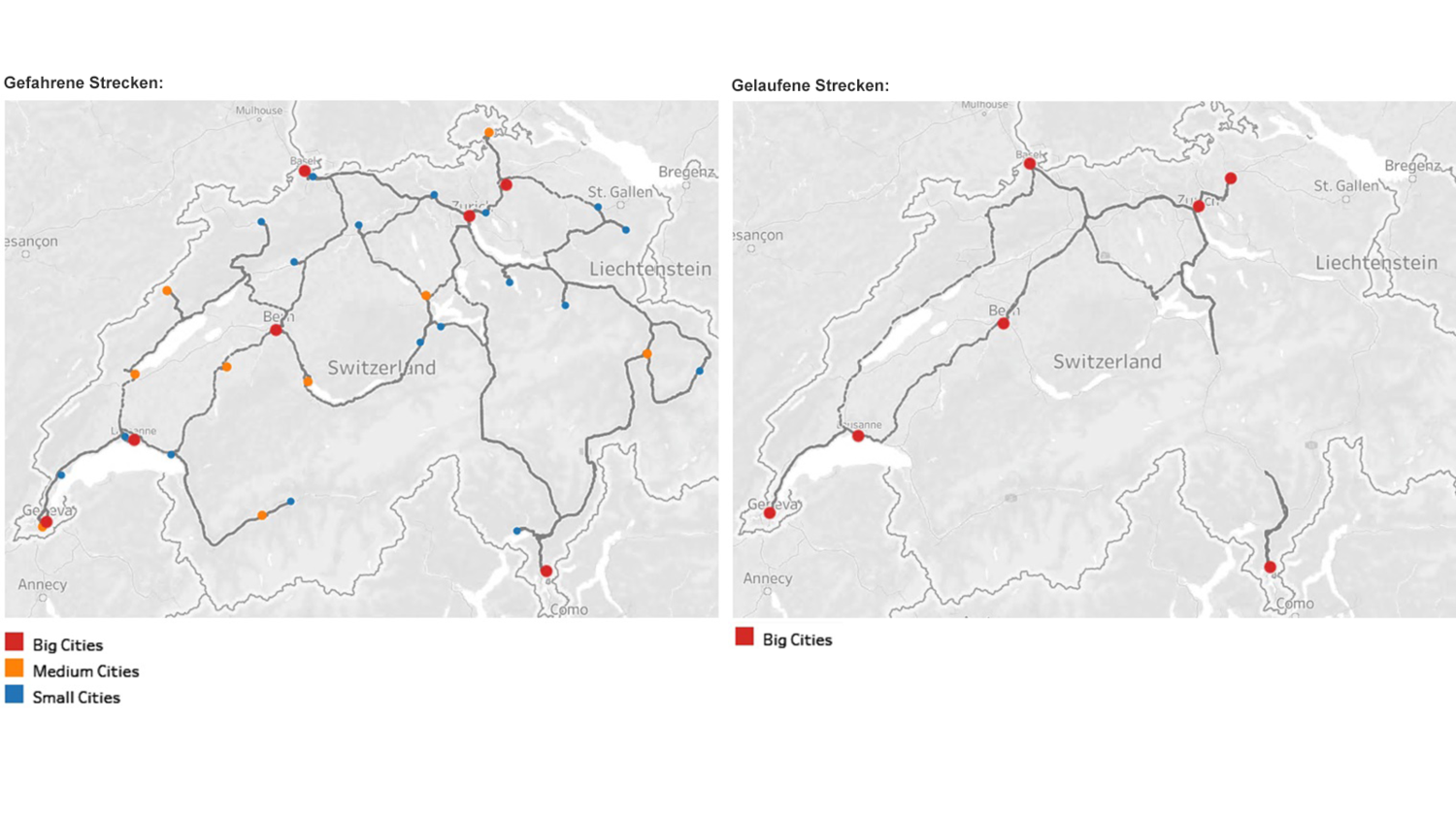 Picking the right network provider depends in no small part on where you live and work. In the cities, Swisscom and Sunrise perform similarly. In the countryside, Swisscom has gained a small lead. The measurements taken on the connecting roads between the cities show the market leader a few points ahead of Sunrise.

Swisscom takes the decisive lead over Sunrise in the data gathered on mobile surfing. The test winner has the fastest network and achieves a download average of 94.2 MBit/s. Sunrise reaches 76.5 MBit/s and Salt follows with 53 MBit/s. The ratings for uploads look similar. Swisscom also achieves better results than the competition in most other categories in the data network, although the gap is always small. Overall, the Swiss networks once again proved their very high level compared to Germany. 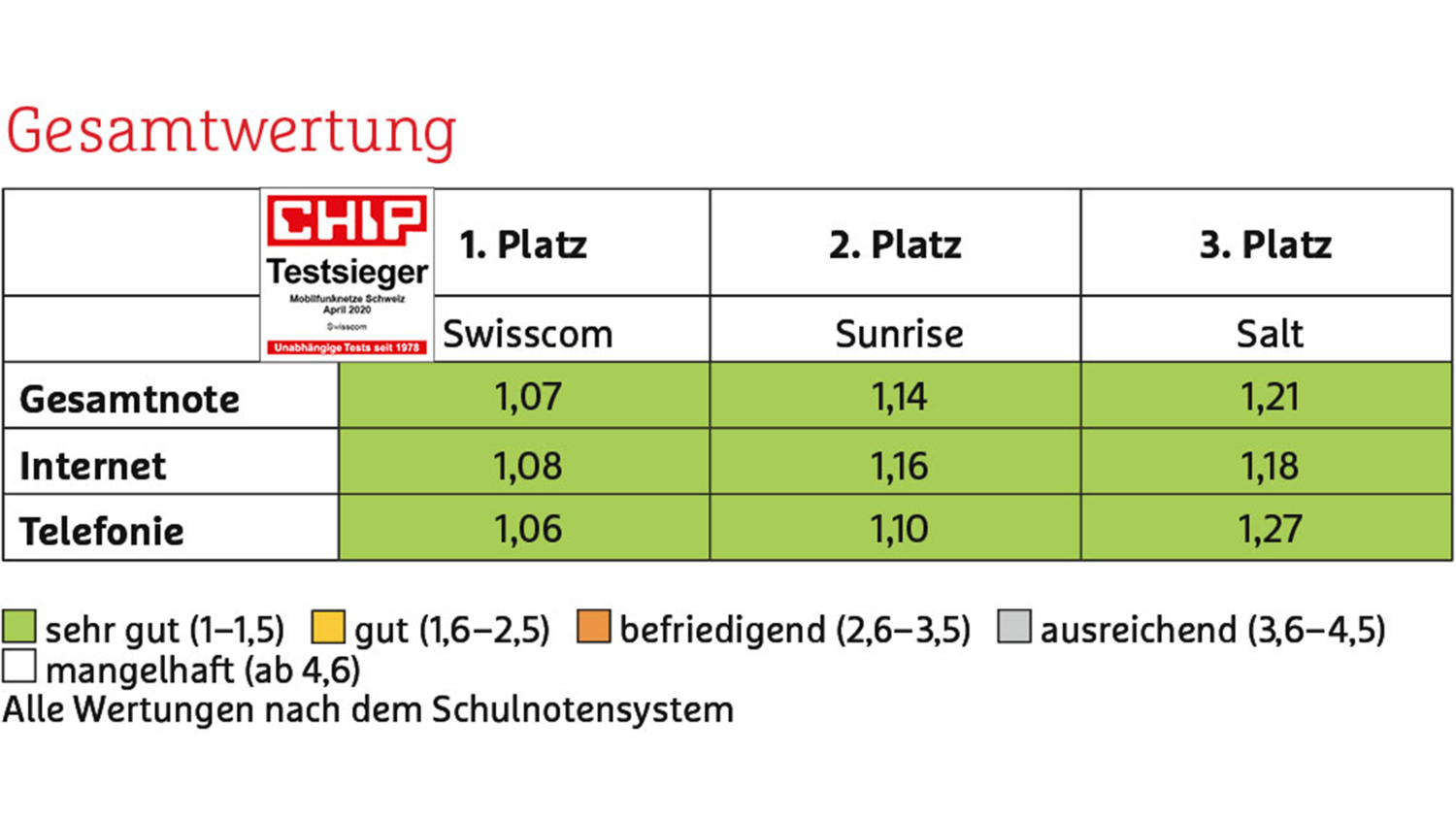 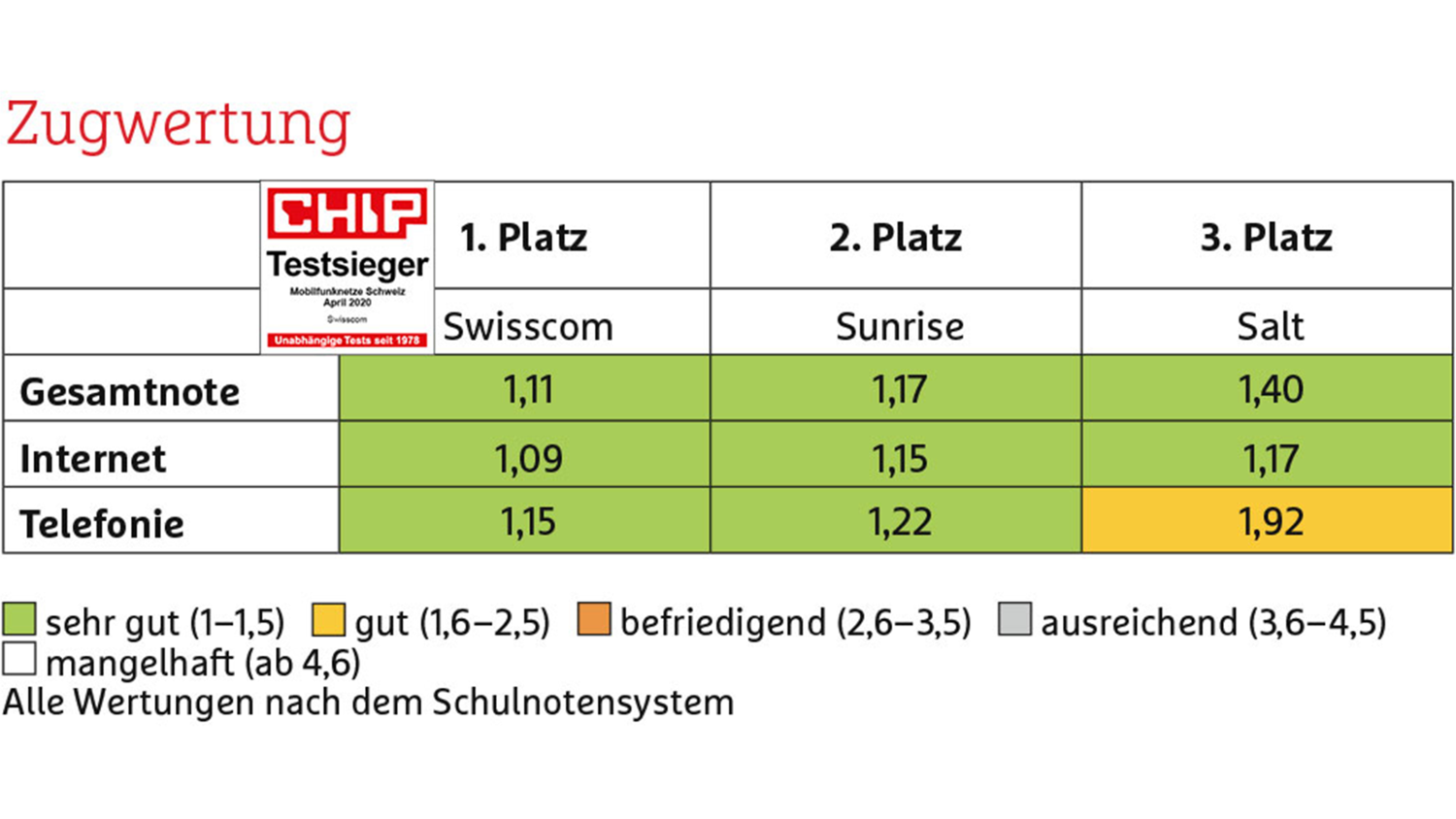 In addition to the normal network test, the data-collecting teams used a special scanner to measure how widespread the brand-new 5th generation of mobile communications technology is already in use across Switzerland. The performance of the 5G networks was also put to the test in some cities with further measurements.

While Salt does not yet offer 5G to its users, Swisscom and Sunrise are already very active in this area. The two companies are pursuing very different expansion strategies: Sunrise is currently growing its 5G primarily in medium-sized cities and in a frequency range that allows very fast data rates but achieves little range for a single base station. On the other hand, Swisscom is also supplying some regions in large cities with fast 5G, but is using a technology that allows 4G and 5G to be offered simultaneously in the same frequency band with relatively little effort. Although this technology does not allow significantly higher data rates than the previous technology, it makes 5G widely available.

Since 5G networks are still in the development stage, CHIP did not included the new technology in its network test evaluation, but next year should see a competitive battle here as well.

The 2020 network test does not reflect the conditions of the current crisis, as the test was conducted in the period immediately before the Swiss lockdown. It is true that the sudden move of many millions of Swiss employees to the home office initially posed major problems for national network providers, especially for telephone calls. However, a glance at the test results shows that none of the three networks have any serious weaknesses. In terms of their network quality, Swiss mobile phone customers can rest easy during the coronavirus crisis.

I began working at St.-Martin-Strasse 66 in May 2018. In my role as editorial trainee on FOCUS Online's sports desk, I interviewed athletes including Moritz Fürste, Simone Biles and Zeina Nassar and covered penalty-shootouts in the German Cup or Champions League deep into the night. In November 2019, I took over the organization of the Konstruktiv Award for constructive, solution-oriented journalism. In my own time I enjoy listening to podcasts, going swimming or cooking for my friends. 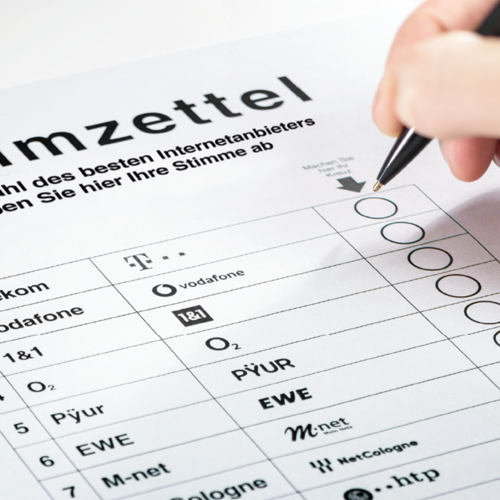 As a consumer expert, CHIP has for the first time evaluated the data speed of German Internet providers. It was examined whether the providers actually deliver the data rates promised in advertising and product information sheets to the user. The test method is based thereby on genuine data of consumers, who were asked in the context of the CHIP Speedtests. Thus the most reliable provider could be determined. 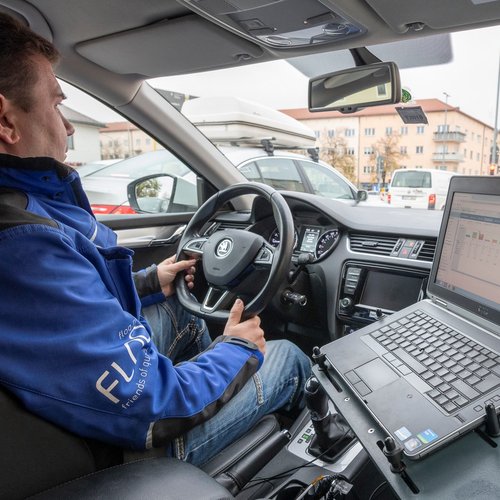 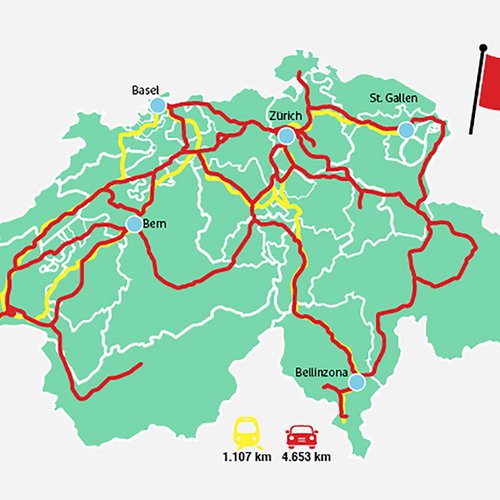