"Mom said my brother is very sick and may leave us soon. Will he go to heaven?" Every day, the "Oskar Sorgentelefon” (Oskar worry phone) of the German association of children's hospices faces questions like these. Germany’s terminally ill children and their loved ones can reach the Oskar Sorgentelefon confidentially, free of charge and around the clock – even in the middle of the night or on holidays.

The telephone service is financed by donations alone, but these have come to a near standstill in the face of the economic crisis that hit German society during the coronavirus pandemic. While donations are slowing down, OSKAR’s telephone hotlines never stand still - and neither does Marie Schulte-Bockum. 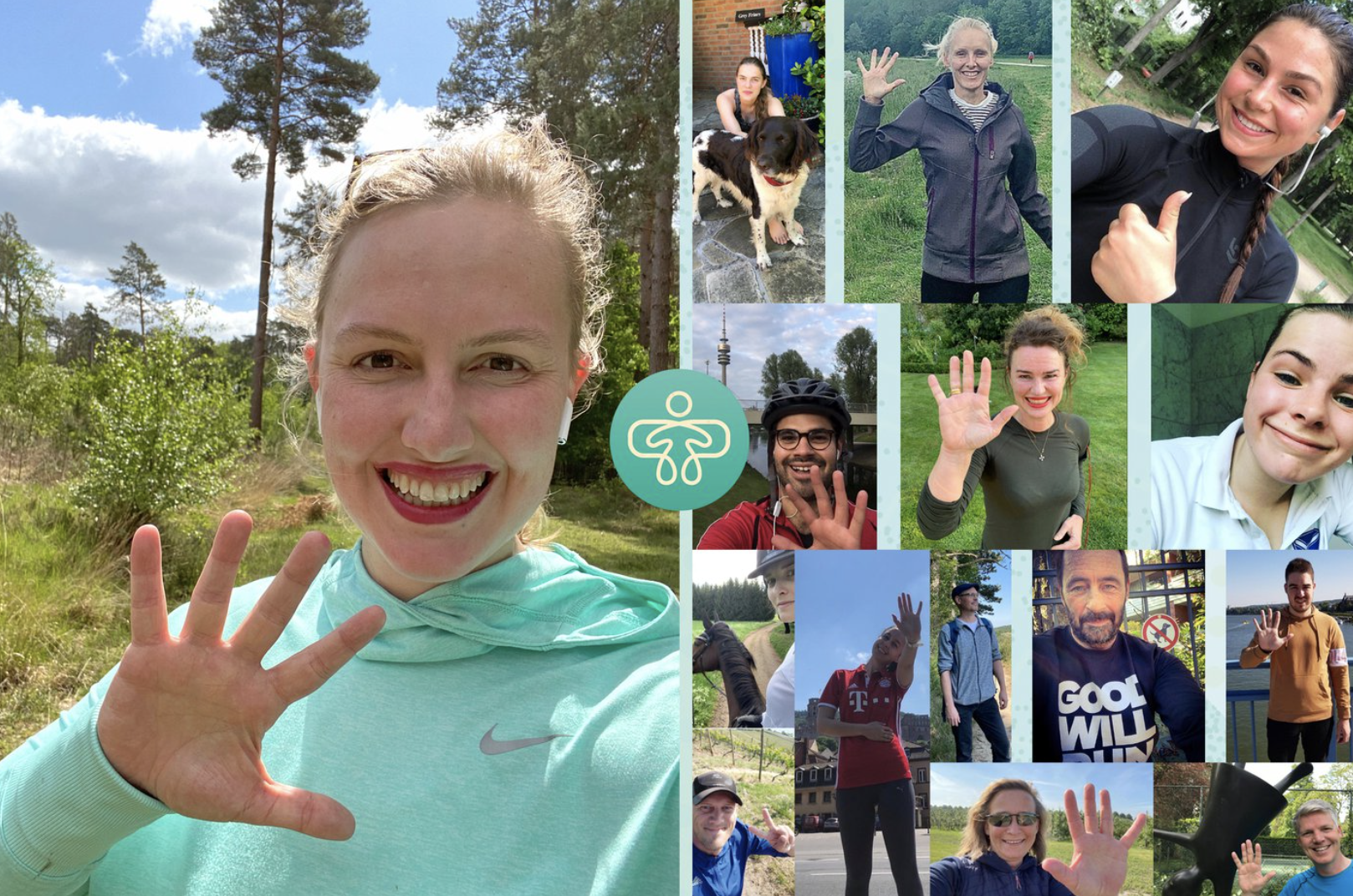 The 27-year-old who works as a Communications Manager at BurdaForward initiated the charitable running challenge "Lebenslauf 2020" (Run for Life 2020) together with the editorial staff of Focus Online and the brand agency Goodwillrun.

Within four weeks, Schulte-Bockum has raised more than 17,000 euros for the OSKAR Sorgentelefon - and has not yet crossed the finish line. "Oskar" needs a total of 100,000 euros a year to keep running - the aim of the fundraising campaign is to raise 20,000 euros.

During these difficult times of the coronavirus pandemic, we wanted to motivate people to exercise, get outside their homes, and do something small to make people happy - all while giving them the opportunity to support a worthy cause!

How did the project come about?

During the coronavirus induced lockdown measures we were all stuck at home. I was in quarantine with my family in England for more than two months and worked from there. A highlight was my daily run in the fresh air. At the same time, I knew from my inner circle of friends and colleagues that everyone wanted to help people in need during the crisis - even though many people I know struggled themselves.

My idea was to combine this desire to help with people’s willingness to exercise outside during the lockdown and our collective urge for social contacts. This is how the idea for a charitable running challenge on social media came about under the simple motto, "Run 5 kilometers, donate 5 euros, nominate 5 friends".

Conceptionally, I was inspired by the impressive "Run For Heroes" campaign in Great Britain, which I also took part in.

How did the idea become reality?

I knew that I needed help, because nobody can do something like this alone. Focus Online’s editor-in-chief Florian Festl liked my idea. He suggested making the running challenge part of BurdaForward's national #CoronaCare initiative. In addition, I picked up the phone and rang the Focus Online running columnist and football podcaster Mike Kleiß, whom I had never met before. He was immediately hooked and offered the free branding support of his agency Goodwillrun.

Mike's running column on May 15th was also the first time that the #Lebenslauf2020 appeared on Focus Online. Additionally, Lauf-Weiter.de's André Fenner and Sarah Lalla were on board right from the start. Around the German public holiday of Pfingsten at the end of May, Lauf-Weiter.de organized a "real" Lebenslauf2020 race with start numbers, certificates, result lists, medals and T-shirts. This raised an additional 12,500 euros within eight days for the OSKAR Sorgentelefon.

What is your goal?

We hope to raise as much money as possible for the German children's hospice work - a sector that was particularly hard hit by the coronavirus pandemic. That's because terminally ill children belong to the high-risk group due to their weakened immune system. The OSKAR Sorgentelefon is financed by private donations alone - and these have decreased dramatically in the current economic crisis caused by coronavirus.

Why are you running for the "Oskar Sorgentelefon" in particular?

The hotline, which can be reached free of charge, is available around the clock to help Germany's more than 40,000 terminally ill children and their families. Even at 3 o'clock in the morning at Christmas, a specially trained adviser will pick up the phone, lend an ear and offer support free of charge.

Germany's association of children's hospices which runs the OSKAR Sorgentelefon was hit hard financially during the coronavirus crisis as fewer people are currently donating to their programs. The association's employees are doing their best despite being in short-time work themselves. Many volunteers are no longer able to get involved at present. That is where we wanted to step in with our campaign: Our goal for the Lebenslauf 2020 is to collect 20,000 Euros to support OSKAR. 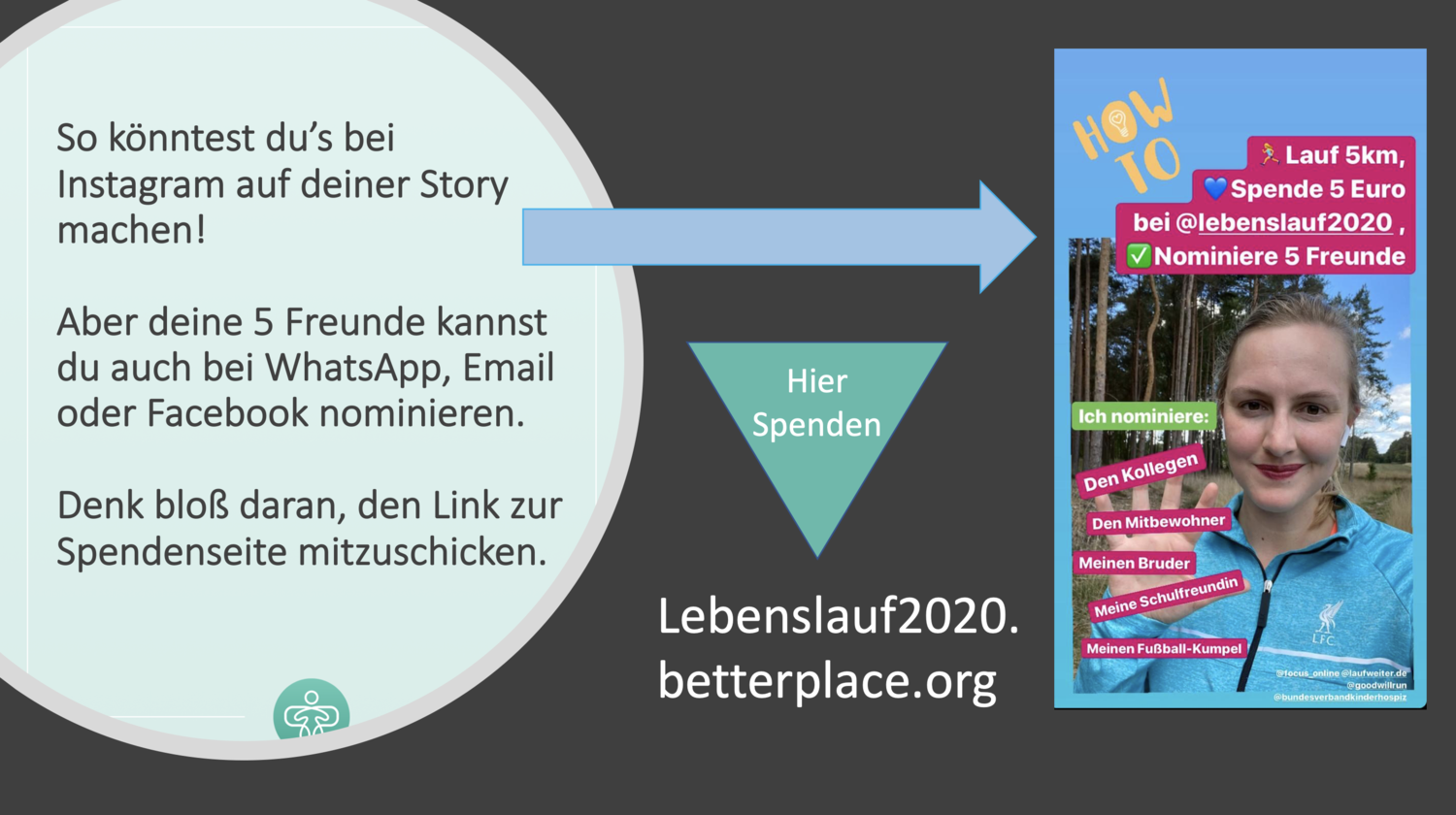 Who can participate? And until when?

Absolutely anyone (!) can participate and do their #Lebenslauf2020. In early June my 76-year-old grandma cycled the 5 kilometres in Germany's Ruhr Valley where she lives. Two of my friends who don't like to run simply walked 2.5 km together through the German wine country in the lower Rhineland - and then donated 5 Euros together.

The famous German boxer Axel Schulz took part from the Golf course this week. And an affected child drove the 5 kilometers in a horse carriage with his sister and mother.

We are currently in our fourth week and 264 people have already participated and donated. Around half of them ran the 5 kilometers. Others cycled, walked, hiked or went rode the distance on Horseback. We even had two tennis players  - the German actress Silke Bodenbender and Florian Festl, Focus Online's editor-in-chief!

Because the campaign got off to such a good start and we are getting such enthusiastic feedback from participants and affected families, we will keep the #Lebenslauf2020 "live" until further notice - for the whole summer.

Last but not least: What do you wish for?

That our campaign motivates people to leave their homes and exercise in the outdoors. That the "Oskar Sorgentelefon" can remain in service and that the crucial work done by the German association of children's hospices becomes better known. That our society dares to talk about the topic of terminally ill children and children's hospices. I just hope that we can build something really big together.

You can find regular updates from Marie and the #Lebenslauf2020 campaign on Instagram (@lebenslauf2020) and Facebook. You can participate and make a contribution on the Betterplace donation page.

I am part of Burda's corporate communications department. Everything that happens in the company converges in our department and I distribute it to the appropriate channels - no matter if the content internal, external or social. I dislike running, so for my #Lebenslauf2020 I simply completed the 5 kilometers on a stand-up paddling board in Bavaria's Walchensee lake. 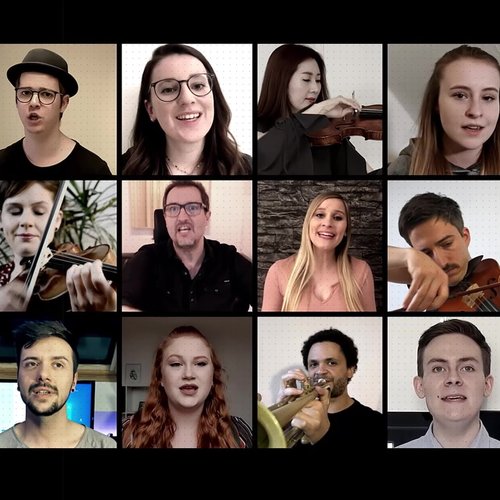 A completely new way of working together

Home office, virtual coffee breaks and selfie challenges - this is what everyday working life at BurdaForward currently looks like. Since the beginning of the week we have switched our business operations to remote with few exceptions due to the Corona pandemic. We are thus not only taking the necessary precautions to keep our services running despite the crisis and to protect our colleagues. We are also trying to limit the spread of the virus with the means at our disposal.